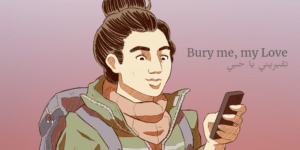 It was announced today that Bury me, my Love, the BAFTA-nominated instant messaging narrative game about a young woman trying to escape from the Syrian conflict, is coming to PC and Nintendo Switch on 10th January 2019. This will bring the emotional, bittersweet love story told from the perspective of ordinary people in extraordinary circumstances to a whole new audience. Watch the new trailer here.

Bury me, my Love is an interactive fiction experience that tells the story of a refugee fleeing Syria with the hope of finding safety in Europe. The narrative plays out through the interface of a messaging app, from the perspective of the refugee’s husband forced to stay behind.

Bury me, my Love was developed with the guidance of real-life refugees but the characters and story are a work of fiction.

“Games do not have to be fun and trivial. Like every medium, games can tackle any topic. Making this game changed the way I think about migrants. I hope it might have a similar effect on players.” said game designer Florent Maurin when speaking to Polygon in 2017.

Originally released for mobile in 2017, Bury me, my Love is co-developed by French independent studios The Pixel Hunt and Figs in a co-production with ARTE, and published by Playdius.