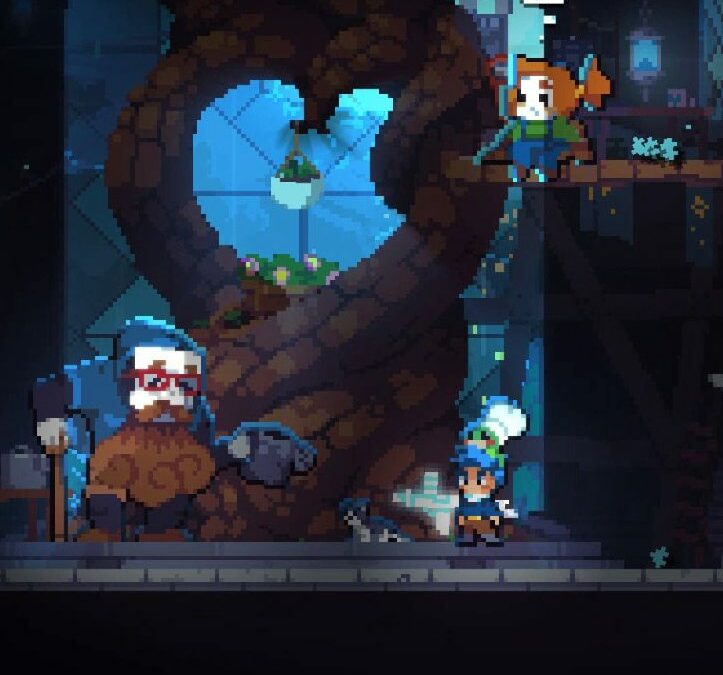 Your hearts are your money. Spend wisely

Montpellier, March 11th 2022 – Solo developer Benjamin Kiefer aka  BenStar and publisher Dear Villagers (The Forgotten City, ScourgeBringer) have today revealed that their twin-stick roguelite platformer Revita will come out of Steam Early Access and launch on the Switch eShop April 21st. The Steam Early Access version’s price will increase to 16,99€/$/13,49£ on March 18th.

In Revita players must climb an ominous Clocktower through a series of procedurally-generated rooms and past challenging boss fights on their way to reclaiming their lost memory. Along the way players will be able to exchange health for randomised upgrades as the game dares them to live on a razor’s edge!

This official release includes all of the content added to Steam Early Access over the past year, including new starting guns, NPCs, enemies, relics, hats, and levels. Finally players will be able to reach the conclusion of the nameless child’s ascent through the Clocktower.

“Revita has been a passion project of mine for over five years now, as it combines twitchy arcade-inspired combat with roguelike mechanics and risky decision making, as you decide what is and isn’t worth trading your HP for,” said BenStar aka Benjamin Kiefer, developer of Revita. “We’ve received loads of useful feedback from players on Steam Early Access, and we think fans and newcomers alike will be delighted by all the content we’ve crammed into the full game. There will be surprises at every turn!”

« We’re all big fans of roguelites around here and Revita has the polish, inventiveness, and charm to make it stand apart from the rest,” said Guillaume Jamet, Head of Publishing for Dear Villagers. “It’s so fast, tense, addictive, and really nails the chunky arcade feel required to bring a twin-stick shooter to life. That it’s also overflowing with content and customization options keeps it fresh for months on end!”

Twin stick shooting, dashing and wall sliding are just the beginning – find power-ups and items on each run

An extensive set of options lets you tweak Revita to your playstyle – slow down time, set an outline colour for enemies to make them easier to track or choose the level of aim assist that feels right for you

Use a variety of guns! Arm yourself with a laser gun, charge gun, machine gun, shotgun, or rocket launcher.

Explore an underground subway line infested with monsters and filled with colourful characters who will help you on your journey.

A nameless child with no memories awakens in a mysterious Clock tower that is connected by a metro system with only a vague sense of purpose, hoping to find answers at the top.

About Benjamin Kiefer aka BenStar

Benjamin « Benstar » Kiefer, is based in Germany and the solo indie dev of Revita. As a self-trained programmer and pixel artist with a loyal following on Twitter, Ben loves making bouncy and highly polished games with big attention to small details. His aim is to create  rich and interesting worlds with fun and addictive gameplay that keep people hooked.

Dear Villagers is a publishing label of Plug In Digital. It’s a place where talented studios can unleash their creativity and focus on bringing unique single player experiences to players on PC and console, experiences that will stay with them long after the credits roll. Dear Villager’s lineup includes the award-winning The Forgotten City, The Dungeon of Naheulbeuk, ScourgeBringer and Edge Of Eternity.